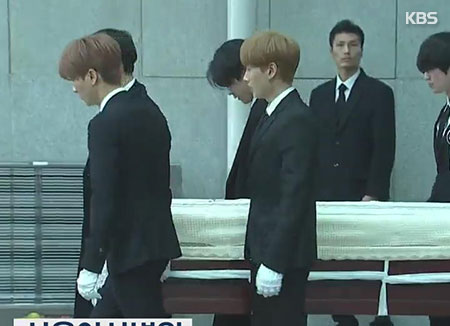 The burial service for lead singer of K-pop group Kim Jong-hyun was held December 21, went to by his family, dear companions and kindred performers.

Kim, otherwise called his stage name Jonghyun, passed on Monday in an obvious suicide. The 27-year-old singer had abandoned a note depicting his fight with depression.

A private burial service for Kim was attended to by his family and partners, including individual SHINee members. Many sad fans in Seoul likewise assembled around the hospital to state goodbye to the late star.

The news of Kim's demise came as a stun to his colleagues and fans, particularly given the way that he's been active in the general population spotlight as of late. Kim's last open appearance was at his performance show, from Dec. 9-10 in Seoul.